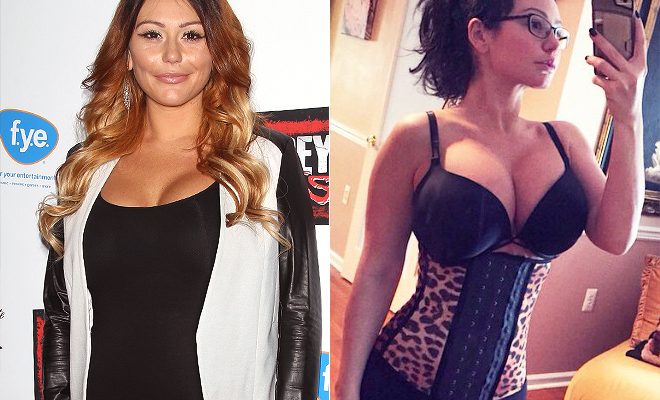 Many believe that JWoww had a boob job and other surgeries as well. Well it is no secret that she had breast implants at her 21st birthday. This is something she revealed herself, so it is no secret. Before her cup size was B, nowadays it is a F cup.

But there are rumors as well. Some fans believe she had botox injections in her face. Could this be? It is a hard question to answer. In some pictures it seems that her wrinkles have disappeared completely, even deep ones. It is hard to believe that makeup could be so effective. She has not confirmed herself that she ever had botox. What do you think?

There has also been rumors that she had a tummy tuck. It is hard to find evidence that she ever did such a surgery.

Jwoww was born February 27, 1986 in Franklin Square, New York as Jennifer Farley. She is reportedly of Irish and Spanish descent. She became famous through MTV reality series Jersey Shore. She is currently appearing in Snooki & JWoww and One Life to Live. On 2013 Farley had ranked in GQ’s Sexiest 100 Ladies Of The 21st Century.

3 quotes which describe JWoww well are:

“I graduated from college with a 3.92 GPA with a degree in computer programming and a BFA in fine arts and animation. My first job was painting a mural in the Grimaldi’s in Queens.\”

“I don’t follow trends. I set my own and I go for the extreme.”

“I eat junk food, cheesecake, cheese, pizza – but just lower amounts of it.”

Feel free to comment your thoughts in the comment section below. What is your personal opinion on JWoww before and after plastic surgery?