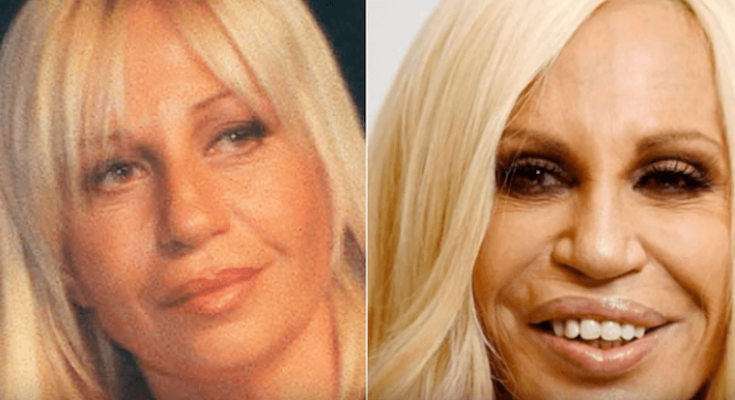 Donatella has gone under the knife several times in order to enhance her beauty. But the plastic surgeries might not have had the effect she desired. When we look at the pictures of Donatella Versace it is obvious that she had a facelift. Furthermore it is clear that she used botox. And her lips! They are immense, no doubt she has used fillers or lip injections in order to make them fuller. Although many people think she has lost some of her beauty because of the surgeries, we thinks she still looks beautiful.

Donatella Versace, the younger sister of the famous designer Gianni Versace was his adviser and inspiration while he was a budding designer. When Gianni Versace started his own fashion company in Milan, she was right there by his side and organized many fashion shows and advertising campaigns. He awarded her with her own diffusion label, ‘Versus’ which produces clothes till today. But after his murder, the ‘Versace’ Empire fell upon hard times and she became creative director of the ‘Versace Group’. It was during the rebuilding process that Donatella showed her other talent – public relations.

“Elegance is always in style for men. There are all different kinds of elegance. It can be silk, it can be a T-shirt.”

“The three biggest fashion mistakes are cheap suits, shoes, and shirts. Spend your money on something good.”

Feel free to comment your thoughts in the comment section below. What is your personal opinion on Donatella Versace before and after plastic surgery?