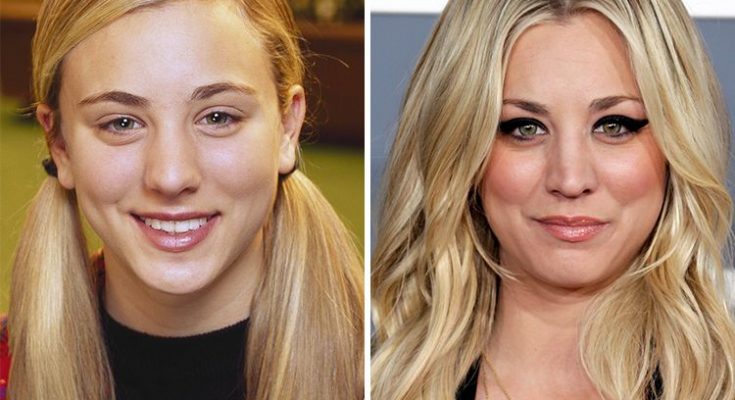 Kaley Cuoco has described plastic surgery as the best thing that ever happened to her. Indeed, she has undergone several surgeries to keep her body hot and to boost her confidence. In an interview she was quoted as saying:
“As much as you want to love your inner self … I’m sorry, you also want to look good,” she said. “I don’t think you should do it for a man or anyone else, but if it makes you feel confident, that’s amazing.”

She is no stranger to plastic surgery. During an interview (Woman’s Health Magazine) she revealed the following: “Years ago, I had my nose done and my boobs — best thing I ever did. Recently I had a filler in a line in my neck I’ve had since I was 12.”

It were not only funny dialogues, that made The Big Bang Theory so popular. Character of Penny attracted a lot of fans to TV screens. Kaley Cuoco plays hot girl next door and often wears tight undershirts or other clothes revealing her hot body measurements. Her 34C bra size looks awesome in dress with cleavage and getting breast implants was probably smart decision in her case.

“I was having a bad day, and my friend said, ‘Go wash your hair.’ I thought it was really silly – but it made me feel so much better. It might be a small thing, but it works. Washing it off and starting over.”

“I love the fashion world. I love clothes. I love style.”

“I like to be home on a Friday night. I don’t go out. I don’t go to clubs. It’s not my thing. I sit at home with my glass of wine and watch hours of reality TV.”

Feel free to comment your thoughts in the comment section below. What is your personal opinion on Kaley Cuoco before and after plastic surgery?