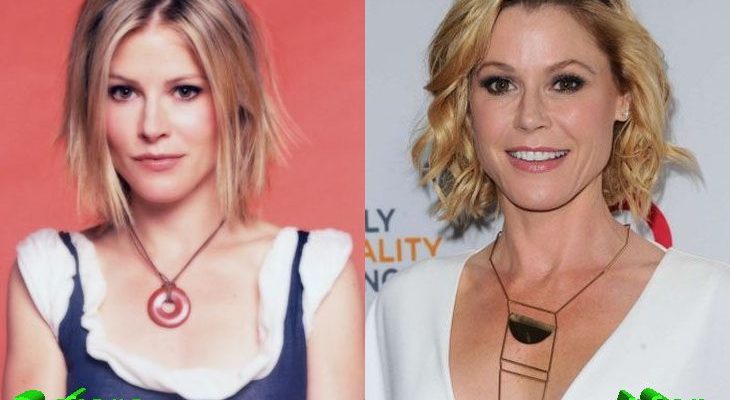 Is it true Julie Bowen had botox injections and did she go under the knife in order to get a boob job? Well, concerning her breasts there sure are a lot of rumors. It seems it isn’t true, because there is no credible evidence that this ever happened.

However it she had botox in her top lip. She was quoted as saying: “One time somebody convinced me… that [Botox] is going to be great. ‘We’re going to [inject] right here on your lip, on the top of it, so you won’t be able to [purse] your lips because it makes you look old,” she recalled. “And let me show you what happens when you try and drink afterwards — it’s like this.”

Julie Bowen was born March 3, 1970 in Baltimore, Maryland. She has mixed English, Irish, French, German, and Scottish ancestry. Her professional acting career started in early nineties. Her most popular appearances include TV shows Boston Legal, Modern Family, and Ed. For her role of Claire Dunphy, Bowen won two Emmy Awards. In 2011 and 2012. She’s married to Scott Phillips since 2004. They have three kids and Julie still maintains her low weight.

“I’m so not stylish by nature, but I’ve learned to work with what I have.”

Feel free to comment your thoughts in the comment section below. What is your personal opinion on Julie Bowen before and after plastic surgery?