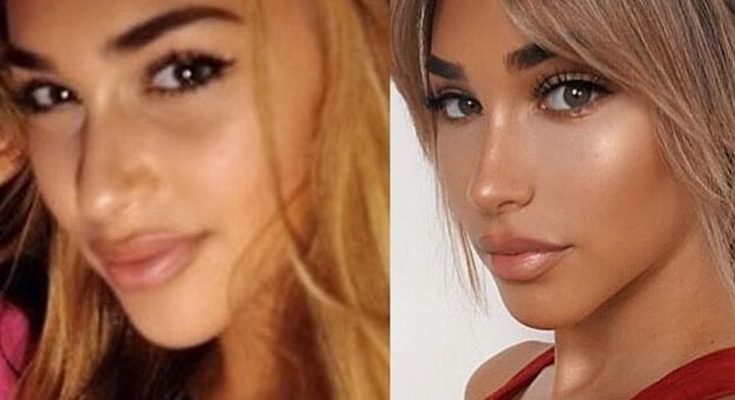 What did Chantel Jeffries do to her breasts? Well, the question is: What didn’t she do? First she wanted bigger boobs. Having got her breasts enhanced, she says she gained weight and ended up with bigger boobs than she had anticipated. At that point she blamed an added 10 pounds for making look too big and giving her a DD cup size that, she says, she ‘never wanted.’

So then she decided to undergo a breast reduction and lift and shared a photo on Instagram showing off her minimized bosom. She shared a video saying: ‘If you’re considering breast implants, or taking them out and getting a lift, I hope that this video helps you. Getting it done the first time hurts a lot, but the lift doesn’t hurt hardly as much.’

Is her nose real though? Well the answer is no. It is clear (in the picture above) that she reshaped her nose bridge in order to make it narrower.

Chantel was born on October 1, 1993 in North Carolina. She works for Wilhelmina models and is very popular celebrity on Instagram social network where she often posts bikini selfies and other revealing photos of her body. She became widely popular thanks to dating Canadian singer Justin Bieber. Who’s sexier according to you? Chantel or Selena Gomez?

“If it started off as a B, I would have been fine with that, but the fact that it went from a D to a B, I wasn’t used to it. It was also giving me a look that I didn’t like, and I just wanted to look like myself again.