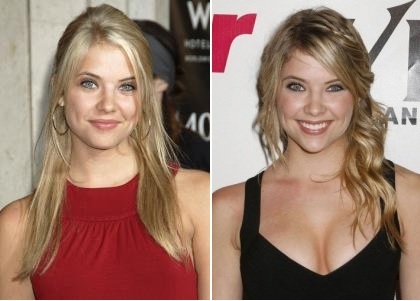 Did Ashley Benson really transform herself with the help of plastic surgery? Some people sure seem to believe she had a boob job and a nose job. So what is the truth? We believe it might be just rumors. There are no convincing pictures of plastic surgery done to her nose. And her boobs do indeed look bigger in some pictures. But that is probably just the work of a push-up bra.

She gained most of her popularity through her role of Hanna Marin on the TV series Pretty Little Liars (2010–2013). Other series Ashley was starring in include Days of our Lives and Eastwick. Her most recent role is Brittany in the 2012 movie Spring Breakers, where she appeared together with Vanessa Hudgens and Selena Gomez. All of them are doing a lot of bikini scenes during this movie.

“I don’t think I could live with anybody. I had rommates, and it’s not for me. I like my space!”

Feel free to comment your thoughts in the comment section below. What is your personal opinion on Ashley Benson before and after plastic surgery?