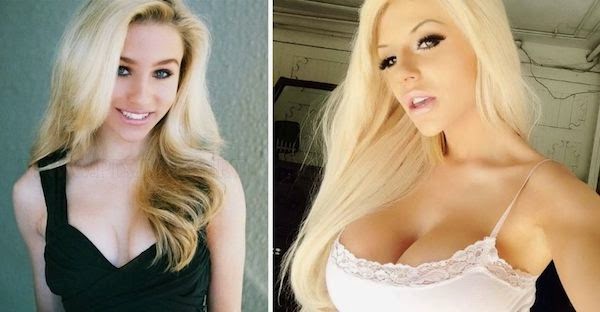 It is fair to say that Courtney Stodden is no stranger to plastic surgery. Just look at her nose! It has been transformed multiple times with the help of a surgeon. The reason for her surgery is that she didn’t like the bump on the side of her nose. Indeed she was quoted as saying ‘In pictures or on red carpets I just feel really self-conscious about this bump.’ Stodden payed 15000 dollars for her rhinoplasty, so it seems it was a very important thing for her to do.

Furthermore, the reality star had a breast augmentation prior to her nose job. This happened when she was just 18 years old. Her already big cup size increased to a DD-cup size. She has proved that she will go to incredulous lengths in order to pursue her idea of an ideal body. If you ask me, her body  looked good before cosmetic surgery too, although her surgeries are of high quality. She was once very proud of her natural body.

Courtney was born August 29, 1994 in Tacoma, Washington. Young Courtney Stodden became famous, when she married 51 year old actor Doug Hutchison when she was only 16. A lot controversy was going around when Courtney several times said, she is 100% natural. She even went publicly to one Beverly Hills plastic surgeon to confirm in media, that she never undergone any surgery to enhance her looks.  That was several years ago. Today she has had nose job and breast augmentation, and she is very open about this.

“Nothing feels sexier than wearing the beautiful truth.”

“I call him ‘dad’ instead of ‘Doug’ sometimes on accident.”

“I got my marriage license instead of my driver’s license.”

Feel free to comment your thoughts in the comment section below. What is your personal opinion on Courtney Stodden before and after plastic surgery?